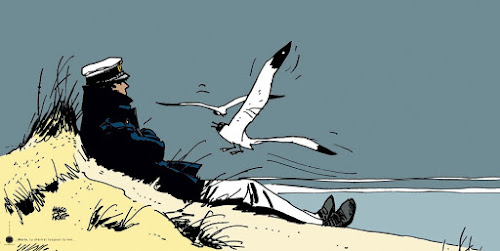 Corto Maltese is a series of European action/adventure comics by famed Italian creator, Hugo Pratt, chronicling the life of its titular character through the early decades of the 20th century. Though related to Tintin, Gil Jordan, Lupin III, and other continental adventurers, Corto carries himself more as a pulpy Sinbad the Sailor. Embarking on adventures for lost Imperial Spanish gold and thwarting Nazi spies for the sake of outrunning boredom than the allure of wealth or pursuit of truth. Along the way he crosses paths with historical figures like Rasputin, Butch Cassidy, Ernest Hemingway, and Jack London.
With striking black and white art from an artist at the height of his powers and narrative depth belying comics, Corto Maltese is well worth the time. Especially if you love pulp adventure tales staring colonialism's ugliness full-on. This series is definitely in the Old Man's Bar DNA. The stories have most recently been translated and printed by IDW and some animation was done 4-5 years ago.
Posted by Aaron B at 8:47 PM