Cat
One of the most populous Furred Folk, Cats are found everywhere. Sizable populations are found in every holdfast in Between as well. Superstitious folk claim Cats are naturally gifted in witchcraft and other Secrets. The aloof Softpaws never provide a straight answer, things just go their way.

Cat's Eye - Low Light Vision
Uncanny - Fate just breaks their way, start with the Lucky Edge or a d8 in the Spellcasting if you have the Arcane Background (Magic)
Racial Enemy (Prey)  Being obligate carnivores, Cats suffer a -4 Charisma when dealing with prey Folk.

Pangolin
From Down South and Far Away in the Burning Lands, the Antseers sense a malady in the North. Young Pangolin warriors head to Clowdertown, seeking their parts in the Great Story.

Prehensile Tail - A Pangolin's tail can hold most melee weapons, granting an additional non-movement action per round without multi-action penalty. Also +1 Parry.
Unusual Shape- The Pangolin's strange shape makes it difficult to find armor that fits. Purchases and repairs cost double.
Outsider - Clowdertown is as far North as Pangolins go. They have a -2 Charisma dealing with Folk from elsewhere. Raccoon
Without a home of their own, the Raccoons thrive in the cracks of society. Forging close bonds of business and friendship, Raccons are less clannish than other Folk. The Masked Syndicate is keen to franchise to anyone willing to pay the fee.

The Right People - Masks make friends easily and start with the Connections Edge.
Clever Hands - Games of chance are the official sport of Racoon.  They start with a d6 in Gambling.
The Usual Suspect - Raccoons always get rousted as criminals, even when they're innocent. It's the mask. -4 Charisma dealing with law enforcement.

Turtle
All across the Land, you can find Hardbacks playing the Rivers on their raft. Their transient life has inured to them to the horrors of Reynard's eternal reign. Insisting that things will change, but remain the same.

Unflappable - Turtles keep on trucking, regardless of circumstances. They start with a d6 in Spirit instead of a d4.
Thick Shell - Their thick shell provides Armor +2, this can be penetrated.
Slow - It's common knowledge Turtles are slow. Their Pace is 5 + a d4 Running die.
Coldblood- They suffer a -2 to Resist extreme heat or cold. 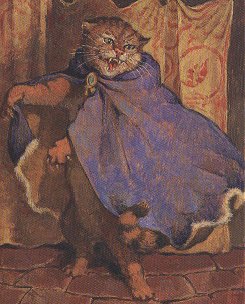 Clowdertown
Second largest holdfast in the Land, Clowdertown is a study in contrast. A semi-communal matriarchy of insistent individualists, the Cats question the tithe but don't avoid it either. They mediate it through the Lunar Lottery - held on the gibbous waning moon. Cats respect the role played by fickle chance, determining who stays and who goes.

Clowdertown is also notable for the dietary demands of its citizenry. Being obligate carnivores, Cats' demand for meat supports a thriving fish market and an illegal trade in captured birds - "Feathers" being the street name. Cats addicted to the kill are called feather dusters.

Places of Interest in Clowdertown

Abby of the Alley - A church of Thumb & Fist. The sisters here care for beasts unable to care for themselves, particularly cattle. Their cheese is prized throughout the Land.

Fleeting Fetches - A pawn shop located in the Litterbox slums. Calico Jack isn't too interested in the provenance of goods that come through the door.

Ms. Kitty's - In the public sphere Cats adhere to a code of aloofness and disdain, sticking closely to Thumb & Fist. Behind closed doors, they get to cut loose and vent steam.  No feralhouse caters so fully as Ms. Kitty's.

The Fishery - On the surface, the Fishery is a fish market and meatpakcing facility.  Behind the heavy doors of the curing vaults lies the inventory for the largest Feather trafficking ring in the territory.

Boiling Cauldron - This bathhouse is the place where business really gets done. Whether gangsters or eldermaus, this is where the real movers and shakers meet to make deals.

Horace's - A pie shop in the Colony neighborhood, no one makes a strawberry rhubarb like Horace's. The whole operation is ran by a mongoose named Simon. He reeks of corn liquor. 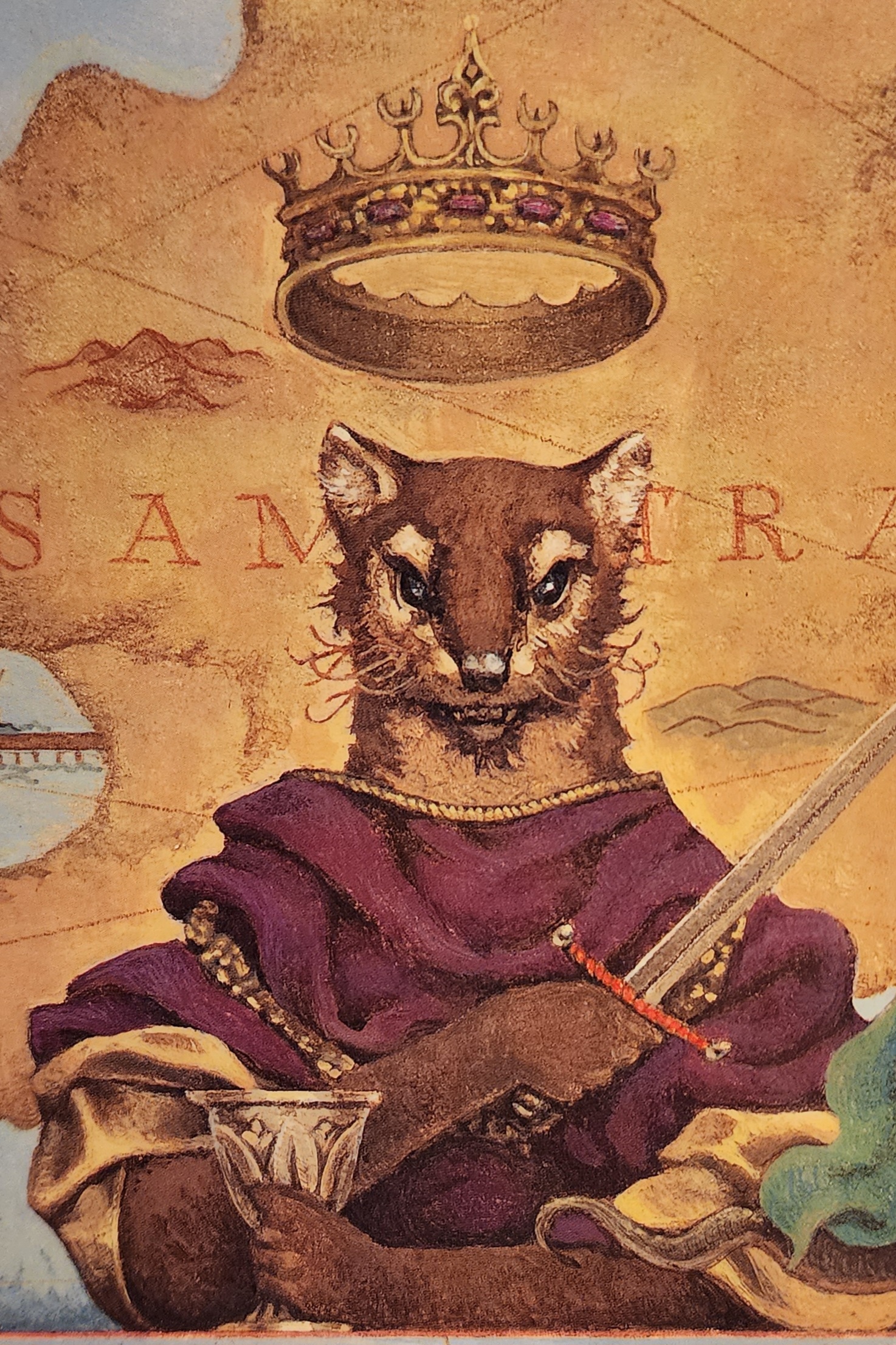 Mother Superior Felice -  The Abbess of the Alley, the Mother Superior keeps a close eye on her congregation. She provides all the help she can for those poor beasts sliding toward the feral savagery of Tooth and Claw.

Calico Jones - The owner and operator of Fleeting Fetches, he has a paw in every pie. If you want to get into the Feather trade, Calico is the gatekeeper

Squeak - A ferret fixer, she connects those looking with.. needs. She harbors a crush on the master thief Mathilda. The money she owes is an excuse to flirt.

Graymalkin, the Warlock - A pallas cat, he was once the court sorcerer of Reynard.  Until he attracted the Foxlord's ire.  And found himself replaced by Mr. Mephistopheles.

Monsier Dan'Quael - A tremendously fat toad with a coat of shelf fungus. Dan'Quael operates the Boiling Cauldron and keeps his earhorn to the ground.

Shifty-Eyed Billy - Hailing from the Empire of Manykings in the distant East. This Tiger Gladiator is a long way from home, and too comfortable to leave.

Duchess - Flat faced and fluffy, the Duchess lays in the lap of luxury.  Ms. Kitty's does well enough that Duchesscan take up pet causes. Like the Resistance.

Sapphire and the Hepcats - A touring jazz band, they work any stage that will take them.  Luckily for Sapphire - they's in high demand.  Her Feather habit takes up a lot of her time and budget.

Horace and Simon - Business partners, Horace is a copperhead, and the pie recipes are his. Venomous snakes are not allowed in the holdfasts so Simon is the face of that business. Horace usually minds their other business - moonshining.

Papa Ringtail -PC- A fat raccoon kingpin. He may lie, cheat, and steal. But no one else is bold enough to make a run at the Lunar Lottery. 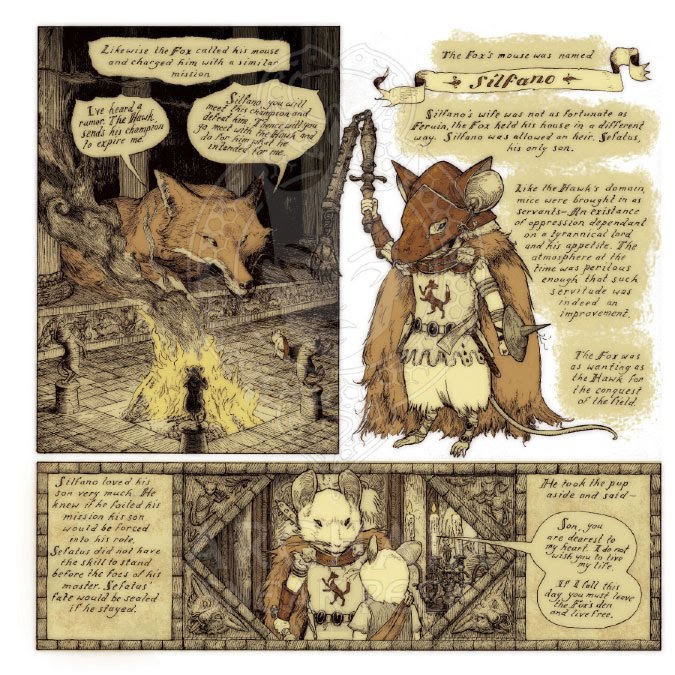 As long as anybeast can remember, the Foxlord Reynard has lived atop the Heart of the Woods in Borchardbriar, a tottering castle assembled from stone and bone. Lounging on the 4-Sided Throne he laughs at Death, that feeble reaper unable to take him. An unnatural autumn shrouds the Land in perpetual harvest and the crop rots but never ripens, The Furred Folk of the Four Corners pay his levy of youth and march their children into his castle when the Moon hides its face.  In his halls they draw painted stones from his cooking pot.

Resistance to his tyranny grows in the West and South. They gather in secret and plot; gathering weapons, lost history, & arcane secrets. Killing Old Mad Craw is the goal, but what happens when the Throne sits empty?

The Vault, the Western Corner- Down below the loam, the Rabbits' warrens grew together into the Vault. The largest holdfast in the Land, everyone who is anyone comes here. Resource management is an ongoing concern and resulted in a coup recently. The Public Safety Committee runs the show now. As long as their youth keep coming, Reynard doesn't care who's in charge. Many believe that without the tithe, the Vault will starve.

Whistler, the Northern Corner - Residents like to joke that if Autumn's entropy poisoned the North, you couldn't tell the difference. Only the toughest Folk brave the harsh tundra. Their bravado conceals fear that the world has left them behind, a weakness the Prophet has exploited.  A wanderer returned to her hometown, she's revived a return to the faith of Tooth & Claw. The nihilistic faith that predates Thumb & Fist, when all Folk were born to their place and hope was a luxury. With starvation a constant threat, some among the Alpha Council wonder if they should be taking the tithe. Rather than the Old Fox. Clowdertown, the Southern Corner - Second largest holdfast in the Land, Clowdertown is a study in contrast. A semi-communal matriarchy of insistent individualists, the Cats question the tithe but don't avoid it either.  The Resistance started here and it's control of the local government is an open secret. Which may explain Reynard's escalating demands for kittens. Stonebones, the Eastern Corner- Known for its extensive mines and foundries, the Ironlords' stranglehold on the indentured Rodens mirrors Reynard's grip on the Land. Promised good and shelter the Rodens risk their lives amongst the leaning buildings, crafting tools of exceptional beauty for their Lord's credit. Outnumbering their masters, the Rodens bear the brunt of Reynard's tithe. The Resistance sought recruits among them, but the rewards for collusion in their own oppression have been too tempting.


Inspirado
Armello, the Redwall saga, Mouse Guard, Disney's Robin Hood, Thomas Covenant, Dark Sword Miniatures, The Builders, Abhorsen, Riddle of the Wren, The Wizards & The Warriors, Over the Garden Wall, The Book of the Dun Cow and sequels