BIGGER THAN BIG. TALLER THAN TALL. 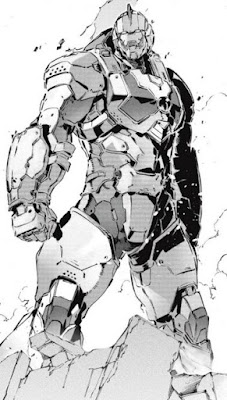 M. Asif Khan grew up in a Pakistani village surrounded by the Himalayas. As the mountains dominated his vision, they similarly dominated his life. He started mountain climbing to conquer these titans and symbolically rise above his origins. He was not prepared for how literal this would be.

While scaling a recently shifted mountainside, Asif discovered a metallic giant packed in the ice and snow, thawing out under the sun. He drew close to the enormous figure and reached out, brushing the metal skin with his fingertips. In a flash the figure disappeared into Asif. The sudden cavity in the mountainside quickly filled with a crush of tumbling ice, snow, and scree dragging him along.
Though he fell just a man, Asif emerged from the rubble and scree as BRUM - THE MOUNTAIN AMONG MONSTERS.
In its last act the alien bestowed the Titan Factor on Asif. Now able to attain tremendous stature, Brum led a successful career combating, and sometimes cooperating with, the planet's Daikaiju. A career that functionally ended when Stellar Tyrant Ophiuchus invaded from the solar system. Joining forces with the Daikaiju, they repelled the Tyrant at great cost: Ptera Khan would never fly again, Anglax was blinded, and Brum couldn't change back into Asif. Now forever a Titan.
Now a resident of the Bonin Island Refuge, Brum must negotiate a new equilibrium.